The Red Oak Community Rural Fire Department started on May 23, 1962 when 30 charter members came together and decided that there was a need in the community for a greater fire protection. These men were mostly prominent business owners in the Greater Red Oak Community. H.R. Allen became the first Fire Chief of the department.

In the early years of the fire department, to be a member in good standing included attending monthly business meetings. If absent three monthly business meetings in a row, a good explanation had to be given for being absent. From the 1960"s through the mid 1970"s Red Oak Fire Department participated in formalized offered through the Pitt County Fire Marshal's Office. Once you completed the training and if funds were available the firefighter would be issued a fire helmet and a long firefighting jacket.

Calls indicating a need for the fire department were received by Pitt County government officials. The county notified Chief Allen's wife who would notify each member by telephone after receiving a call indicating the need for the fire department. Firefighters also received notification of alarms through a "fire whistle" erected at the fire station. The "fire whistle" is still being used today.

The 1990"s were probably the most active years in the fire department history with the securing of additional apparatus and the purchase of our second new fire engine. A 1996 International E-One pumper with a 1000 gallon tank. The 90's also brought the fire department it's fourth Chief Mike Smith.

Chief Smith took the department into modern times by updating our by-laws, increasing training and implementing a trained team  to perform basic rescue technician such as vehicle extrication and high-angle rescue. Those methods are still being used today. He also set in motion plans in 1997 for a new station.

In September of 2001, the new 12,000 square foot fire station was erected by the hard work of it's members with only a few items contracted for it's completion. Farrior & Son served as our contractor with Ivey Pinkelton supervising the work. The new building, at teh corner of Frog Level Road and West Star Street, gave the department four apparatus bays, which was an improvement over the original building's three bays. We are currently operating in the same building today.

As the department grew, so did the size of the fleet. The department already had two engines but decided that a larger engine would better suit the needs of the community. Engine 1 (5101), a 2004 Rosenbuerer pumper, was purchased. This engine featured a 1500 GPM pump and 1000 gallon tank. This purchase would start the department's tradition of black and red apparatus.

In 2006, Chief Mike smith retired from the fire service after serving over 20 years as a committed leader for the Red Oak Fire Department. Chad Singleton was appointed the department's fifth Fire Chief.

Bryant Beddard was appointed as the sixth Fire Chief of the fire department in July 2009. Chief Beddard worked diligently to reduce operational cost during tough economic times while continuing to provide the same level of essential services to the community.

There have been many "firsts" for this organization. The Red Oak Fire Department was the first department outside of a municipality in Pitt County to become an EMT level provider.

The next big change in the department came in 2014. The members at that time saw a need for a Rescue Engine to protect the community. At the time, the closest "Rescue" was in Winterville which was 10 minutes away. The Red Oak Fire Department has always been a very strong volunteer fire department and its reputation is known throughout the state and region as being a role model department for others.

The department celebrated 50 years of service to the community on January 21, 2014 and continues to this day to answer the call. Currently, there are over 30 members on the roster and we have opened the membership up to individuals outside of the district, further strengthening our department.

In 2017, George Whitfield Darden IV became the eighth Fire Chief and continues to serve in this capacity today.

The membership of Red Oak Community Rural Fire Department is proud of its heritage. We give God the thanks and glory for all things accomplished. Our faith and hope for the future are built, not on buildings, organizations, or certain beliefs, but on the Lord Jesus Christ. 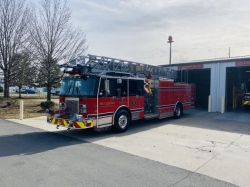